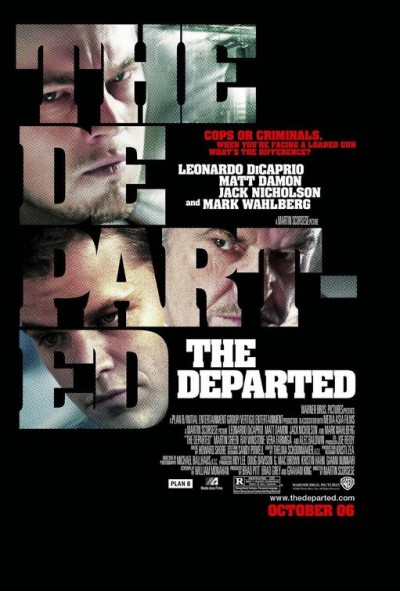 Sally
I feel really let down by The Departed. It is such a great film right up until the final 15 minutes. At that point Martin Scorsese delivers a swift punch to the gut, or, as I see it, flips everyone the bird. Either way, the final scenes pretty much nullify the entire story you’ve just watched, leaving one to wonder, “what was the point of all that?”

(This is one of rare occasions where I’ll issue a spoiler alert within a review. The Departed is a new enough movie that readers may not have have seen and may still want to. So stop reading now if you don’t want the ending spoiled. Maybe skip Ben’s review as well, because I’m sure he’ll be mentioning the ending too.)

The actual plot of The Departed isn’t all that original. It follows two police recruits who take different paths within the force. Billy Costigan (Leonardo DiCaprio) is recruited by his superiors just before graduation from the academy to go undercover in Boston’s Irish mob to help catch its leader, Frank Costello (Jack Nicholson). His family had ties to the mob, so he’s the perfect candidate for this mission. Another officer, Colin Sullivan (Matt Damon), was taken under Costello’s wing as a boy, and is set up as the mobster’s personal mole within the police department.

Though the story is a bit of a cliche, the movie itself is an enthralling game of cat and mouse, with Costigan and Sullivan trying to discover each other’s identities. DiCaprio is excellent as always, and robbed again at the Oscars that year. Damon and Mark Wahlberg also give unforgettable performances. The entire film leaves you on edge, wondering who will be discovered and who will be victorious in the end.

Which is what makes the ending so disappointing. Everyone dies. Well, not everyone, but DiCaprio and Damon’s characters do (as well as some other key characters). Billy Costigan is just on the verge of outing Colin Sullivan as the mob’s mole, when he is killed by a second mole within the police department. This is just too convenient, if you ask me. Costigan is eventually redeemed when someone else discovers Sullivan’s true identity and kills him, but it just feels like too little too late. I’ve invested two and a half hours on these people, and the ending is less than satisfying.

Ben
This is almost the perfect crime thriller. I say almost because I hate the ending so much. I try to avoid spoilers on this blog, but I can’t talk about my problems with this film unless I go into them, so I will.

The Departed has nearly everything going for it. It has an awesome cast, an iconic director and an interesting story, even allowing for the fact it is a tad unoriginal. The film is a remake of the classic Chinese thriller Internal Affairs. It follows undercover police officer Billy Costigan (Leonardo DiCaprio), who is attempting to infiltrate the Irish gang that controls most of the crime in Boston. The gang is led by Frank Costello (Jack Nicholson), who also has mole inside the police force, Colin Sullivan (Matt Damon), feeding him information. A game of cat and mouse ensues as Billy and Colin try to uncover who each other is before their cover is blown.

I love nearly everything about this film. The acting is fantastic, director Martin Scorsese has assembled one of the best casts in recent memory. Other than the always great DiCaprio, Damon and Nicholson, Martin Sheen, Alec Baldwin, Vera Farminga, Ray Winstone and Mark Wahlberg all give some of the best performances of their career. I loved the Boston setting, this city has not been the focus of many crime films so it was really interesting for Scorsese to take the film to Boston when he could so easily have set it in New York and played it safe in his wheelhouse by using the Mafia he knows so well. It was a risk to take the film to Boston, but it pays off so well.

Now for what I didn’t like about this film. The end of this film is such a letdown. If you don’t like spoilers then stop reading now because I’m going to talk about them. The film ends with DiCaprio getting blown away by another mole inside the police force we didn’t know about. I hated this ending. The audience has just spent the last two hours watching DiCaprio go through hell trying to catch Costello and identify his mole, and just when it looks like he has succeeded, he gets his head shot off. When I saw this in the theatre, I felt really empty leaving. I did not like the ending one bit. Damon eventually gets what is coming to him, but the end of this film still left me wanting more.

I can’t give this film a great review purely because of the empty feeling I had when leaving. Up until the last ten minutes, this film is one of the best crime dramas ever made. It is comparable to the brilliant Heat and Godfather films. The final few minutes let this film down, though.