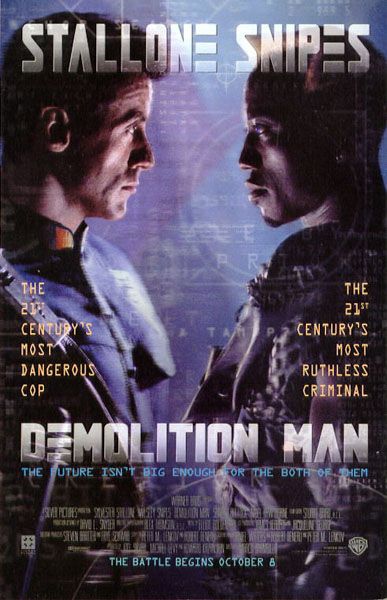 Sally
This is a surprisingly funny movie. And intentionally so, which is usually not the case for most action flicks. The concept is also refreshingly unique, and though I have some minor qualms with the concept, I wouldn’t be deterred from watching it again.

Demolition Man stars Sylvester Stallone as police officer John Spartan (subtle), who is great at catching criminals, but has a penchant for causing thousands of dollars in property damage in the process. When he is blamed for the death of 30 or so hostages, he is sent to cryoprison. However, Spartan is awoken in the idyllic, crime free future to capture his old nemesis, Simon Phoenix (Wesley Snipes), who was also frozen and escaped during his parole hearing.

While the cryogenically frozen prisoners concept is unique, it also seems incredibly unfair. When a murderer gets a 50 year sentence in real life, he will either be released as an old man or die in prison. Either way, the best years of his life are taken from him. In Demolition Man‘s cryoprison system, prisoners are rehabilitated in stasis, and released back into society once their sentence is served. I get that this is ideally how a prison system should function, but in the context of this movie it just seems really unfair. Someone who commits a major crime will someday get to live out the rest of his life given the fact that if he was 30 when he was frozen, he’ll be 30 when unfrozen. Yet his victims are still dead, and their family members might one day see their loved one’s murderer walking the streets. Yeah, everyone the criminal loves would also be dead or old, but if the guy is already insane like Phoenix, I hardly think he’d care. I guess what I’m saying is that I prefer my movies have a Judge Dredd-style of justice. Judge, jury, and executioner… in two minutes flat.

Other “problems” I have with the movie are more comical in nature. For instance, in this utopian future the cities of Los Angeles and San Diego have merged into a single city of San Angeles. Having lived in Orange County for several years, I know firsthand how its residents feel about being mistaken for LA, so they were probably super pissed at finally being annexed by the neighboring county. Also, the only restaurant left standing after the “franchise wars” is Taco Bell. This is just about the most horrible thing I can imagine. I’ll take that rat burger over a Chalupa Supreme, thank you very much. Oh, and swearing is illegal. That would be a huge fucking (“You have been fined 5 credits for violation of the Verbal Morality Statute.”) problem for me.

But for real, this is a genuinely funny and well made action movie. Stallone and Snipes are great at balancing seriousness and humor, something I previously only associated with the likes of Arnold Schwarzenegger. It also features Sandra Bullock in one of her earliest roles, as a plucky cop who is bored with her job due to the fact crime is virtually non-exsistent in this utopian future. Actually, this was another qualm I had with the movie. Bullock’s character seems incredibly competent and ambitious; so why on earth would she join this do-little police force?

Oh, whatever. She’s delightful and so is the whole damn movie.

Ben
This is my favourite Stallone film. You can have your Rocky and Rambo movies, I will take this funny action flick over them any day. Stallone shows great comedic timing for possibly the only time in his career as the grunting burly police officer thrown into an idyllic future where violence does not exist anymore. This is also another great example of spot the celebrity. There are plenty of actors who are stars now that appear here in smaller roles. I noticed a pre nose job Benjamin Bratt, Denis Leary, Rob Schneider, and this is also one of Sandra Bullock’s first movie roles.

Stallone plays John Spartan, a policeman from the late 90s who is hunting down his criminal nemesis Simon Phoenix (Wesley Snipes). In the process of arresting him, Stallone is accused, and then convicted, of inadvertently killing all of Phoenix’s hostages and is sentenced to 50 years in a cryo-prison. This new type of prison freezes its prisoners into ice cubes, then they are thawed out when their sentence is over and rehabilitated into functioning members of society. Fast forward to 2032, where there is no crime anymore and the worst thing police officers have to deal with is graffiti. Phoenix escapes from a parole hearing and starts causing chaos. Police officers realise very quickly they are not equipped to handle Simon Phoenix so they thaw out John Spartan and offer him parole in exchange for helping them catch Phoenix. He agrees and along with wide eyed police woman Lenina Huxley (Bullock), he uses unorthodox methods to hunt down Phoenix, eventually uncovering a large conspiracy.

I really enjoyed this film. I love the look of the future, where everything on the surface seems so white and sparkly, but is actually hiding a dark underground. I am always surprised that sci-fi films like this do not receive more praise at awards season for their costume design. Historically, period dramas always receive these awards, but at least those costume designers know how things looked in the past. There is historical evidence to show what people were wearing back in those days. For a film like Demolition Man, a costume designer must create everything from scratch. I think it is a far more spectacular effort than just copying something we already knew existed.

Like I said, this film is very funny. There are nice little shout outs to the 90s in this film, like having Lenina mention the Schwarzenegger Presidential Library. Arnold and Stallone have always had a friendly rivalry and tend to shout out each other where possible. Arnold has done the same in his film Last Action Hero, where he replaced a Terminator 2 poster with Stallone as the actor. It is nice to see these two don’t take themselves too seriously. I also loved that Taco Bell is the only restaurant left in the world. I wonder how many restaurants this film approached to give them the rights to this. There is a whole sequence set inside the restaurant and it is mentioned multiple times as the only restaurant left after the ‘big restaurant war’. Stallone is the perfect guy to be thrown into this world. He is a brutish, manly man who does not fit in this world at all. Seeing him try and fit in is one of the film’s highlights. Stallone is surprisingly funny in the role. Wesley Snipes also gives a terrific performance as the villainous Simon Phoenix.

Of course, you can’t review Demolition Man without mentioning the three seashells located in all bathroom stalls of the future. When John Spartan first goes to the bathroom, he is mocked for not knowing what these seashells are for. Their use is never explained in the film, although I’ve read multiple theories on what they are used for. This one is my favourite.

This film is very funny. An original story, a strong leading man, along with Snipes as an intimidating villain and a solid supporting cast of up and comers make Demolition Man a winner.