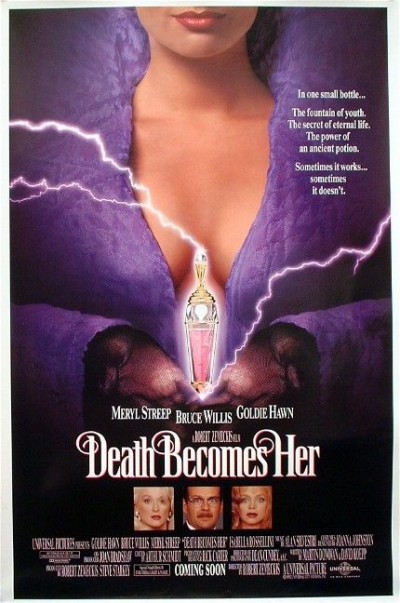 Sally
Death Becomes Her is probably one of the more realistic portrayals of what it’s like to be an actor. Hear me out: Women are expected to remain youthful, beautiful, and flawless for decades. Then when the natural aging process starts to show they’re forced to either “age gracefully” and be typecast as the mother/grandmother/crazy old lady, or resort to plastic surgery and become tabloid fodder for going to extremes to compete with younger actresses. But if you’re a man, you can pretty much count on being cast opposite 20-something beauties well into your 50s so long as you remain reasonably attractive. (Although, sometimes you don’t even have to do that.) It’s funny to think that the main cast of this movie represent all three of those scenarios.

Meryl Streep has gone the “aging gracefully” route, and most of her roles over the past decade have been heavily character driven (The Iron Lady, Julie & Julia), as an aging matriarch (August: Osage County), or a ruthless bitch (The Devil Wears Prada, The Iron Lady). I’m sure Streep isn’t crying over the roles she’s being offered, but they’re a far cry from being cast in romances opposite Robert Redford or Clint Eastwood as she once was.

Goldie Hawn has had work done. She consistently pops up in tabloid stories featuring plastic surgery “before & afters,” and was ridiculed after appearing at this year’s Oscars with a new facelift. But the pressure to look good must be bigger for Hawn than it is for Streep. Hawn was quite the sex symbol for much of her career. For many she will always be the wide eyed, wild beauty from Rowan & Martin’s Laugh-In or the plucky factory worker from Swing Shift. Making the transition from that to more matronly roles doesn’t seem like a career path that Hawn wanted; she hasn’t made a movie since 2002 (The Banger Sisters, in which she plays a woman in her 50s who is eager to re-experince her wild days as a rock & roll groupie.).

And then there’s Bruce Willis. This guy has been balding since Moonlighting, but was consistently cast opposite ladies at least a decade his junior well into his 40s. I get it– he’s a charming guy. Lack of hair doesn’t change that. But would an actress ever be afforded this sort of leeway? Probably not.

As for the movie itself, Death Becomes Her has aged remarkably well. Some of the special effects are starting to look a tad dated, but for the most part everything still looks great. The best is still the giant hole shot through Goldie Hawn’s stomach, though Steep’s twisting neck is fun too. I also loved Bruce Willis in this movie. He’s been doing more serious action oriented movies for so long that it’s easy to forget what an excellent comedic actor he is. He also holds his own in scenes with Streep and Hawn, which is no easy feat.

Did the cast realize during filming that they’d, to some extent, become these characters within two decades? Perhaps. I’d like to think that Streep and Hawn knew that their careers would change and possibly fade as their looks did. Maybe Death Becomes Her was their way of poking fun at the system, while resigning themselves to their inevitable fate. They certainly seem like smart enough women to be in on the joke.

Ben
This is an underrated film. I really like the irony of two aging stars (Goldie Hawn and Meryl Streep were both in their 40s when this was made) wanting to keep themselves looking young. It is a problem many actresses in Hollywood have had to deal with, with many choosing not to age as gracefully as they could. If only this magic potion existed that would allow them to stay young forever. It is a great commentary on the problems older actresses have to face, and it is also a very funny movie. It is also worth noting that this is not a problem for many male actors. This can’t be emphasised any better than the career of their male co-star Bruce Willis. Willis has been going bald since the mid-80s, but his career has managed to go from strength to strength despite this. I doubt an actress would be so lucky.

The film follows Madeline Ashton (Streep), an actress who has always had a rivalry with her high school friend Helen (Hawn). Helen is a writer and jealous of Madeline, and comes to hate her after Madeline steals her fiancée, Ernest (Willis). The film jumps forward seven years to show Helen as an overweight shut in with hundreds of cats whose hatred of Madeline eventually has her sent to an insane asylum, while Madeline and Ernest are in a loveless marriage as her looks have begun to fade and her selfish nature revealed itself. The film then jumps another seven years to one of Helen’s book signing events. Madeline is shocked to find that Helen looks fabulous and becomes desperate to emulate her rival. When her plastic surgeon will not perform anymore surgery on her, he recommends Madeline visit Lisle Von Rhuman (Isabella Rossellini). There she finds the answer she has been looking for, but she is not prepared for the cost that comes with it.

Death Becomes Her is a very funny film. I was very surprised by Meryl Streep’s comedic ability. She does not do many comedies, much of her films are dramas, but I was surprised to see that she is very funny. Hawn and Willis are always good and the three leads have terrific chemistry. While watching this, Sally and I started discussing who would play these characters if the film was remade. We both agreed it’d be really funny to see Goldie Hawn’s daughter, Kate Hudson, star in the film, but as Madeline. I think she could be great in that role. Joseph Gordon Levitt has already played a young Bruce Willis once before in the terrific Looper, why not emulate him one more time in our imaginary remake. The third cast member is still up in the air. I suggested Alison Brie, but she’s not a lock. I would definitely see this film.

Other than being a very solid comedy, the special effects in Death Becomes Her are also top class. ILM has done a great job showing the aftermath as Hawn and Streep’s bodies start to fall apart. The movie relied on being able to show these ladies in all sorts of positions, at one point Hawn spends an entire scene with a gaping hole in her stomach after a gun shot from Streep’s character. The effects needed to work for the movie to be good, and they do. 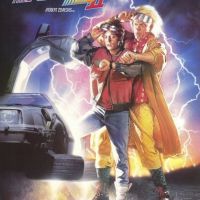 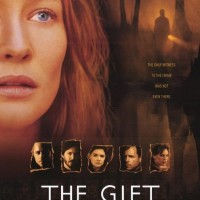