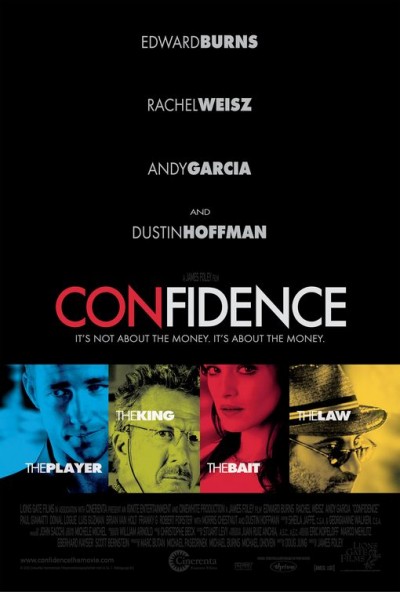 Ben
The best way to describe this film is Ocean’s 11 lite. This is a grittier, less cooler version of the George Clooney heist film that came out a few years earlier. When I say it’s not as cool, that isn’t necessarily a bad thing. One of the defining traits of the Ocean’s movies were the fact they are really cool and flashy. Saying a movie isn’t cool like Ocean’s 11 isn’t a criticism, not many movies are as cool as that, it’s just an accurate way to describe this film. It is Ocean’s 11, without the flashy lights.

Confidence follows a team of conmen/women who travel across America looking for their next mark. When they inadvertently end up robbing the local crime boss (Dustin Hoffman), the team agrees to work a job for him and split the takings as a get square. Ed Burns stars as Jake, he is the captain of this crew. Burns feels like a less famous version of Ben Affleck in this film. He’s good in the role, but his character comes across as somewhat B grade. Rachel Weisz, Paul Giamatti and Brian Van Holt make up the rest of Jake’s crew, while Donal Logue and Luis Guzman also star as a couple of crooked cops that assist Jake when he needs it. They set out to rob one of Hoffman’s rivals so they can be square with the mob boss and move on to the next town. Things get complicated when an FBI agent who has a history with Jake arrives in town looking to put him away.

I liked this film. One criticism is that it starts really slowly (Sally fell asleep), but builds up really well to a great climax that I certainly didn’t see coming. There is a twist ending in this film that really came as a surprise to me. I enjoyed how Jake was two steps ahead of everyone throughout the film. His character is very smart, even though he comes across as a bit of a punk. This film is just average, if you want a good heist film, stick with Ocean’s 11.

Sally
I fell asleep during this movie. To be fair, I had drank about three glasses of wine prior to watching it, and I don’t drink often so when I do it really hits me. But Confidence also starts very, very slowly and just couldn’t keep my interest. If I’m going to watch (and really enjoy) a movie about grifters pulling off the ultimate con, then I’ll go to The Sting or Ocean’s 11. Both are more entertaining from the get-go, and have bigger star power.

Maybe I’ll come back to Confidence and give it a proper review, but right now I can’t be bothered.