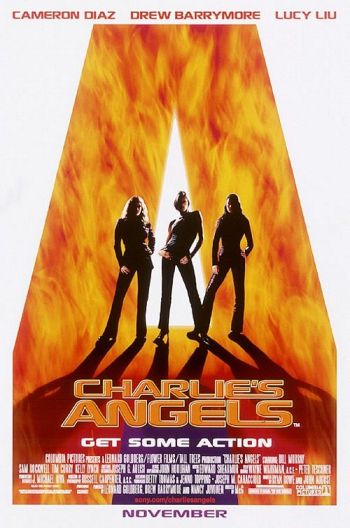 Ben
Charlie’s Angels was released in the early 2000s, marketed as a contemporary example of female empowerment, and we all fell for it. We all saw this film about three spunky lady spies and thought it was a great image of feminism for a new generation.

We were all fooled! After watching this film again, what I originally thought was a rollicking fun ride with some strong women has become a series of scenes to objectify women as best they can. I remember when this came out and Drew Barrymore (who was also a producer) was waxing lyrical about female empowerment and I’m not sure how she thought Charlie’s Angels was an example of that. It does its best to get the three good looking leads (Barrymore, Cameron Diaz, and Lucy Liu) into as many tight fitting barely there outfits as possible. I can count on one hand the number of scenes that Cameron Diaz is wearing pants. She is constantly in her underwear or a bikini, and usually there’s no reason for her to be.

Other than being a hypocritical film about feminism, there are some fun action scenes. Producer Barrymore hates guns and made a point of making this new generation of angels weapon free. This leads to some great fight scenes, mostly from Liu and Barrymore. Diaz tries hard, but sometimes it’s hard not to laugh at her faces during her slow motion Kung fu routines. They look ridiculous sometimes.

While the three leads are somewhat bland, the highlight of the film is the supporting cast. Bill Murray is always great as the angels’ minder, Bosley. Sam Rockwell plays the head of a tech company who hires the girls to get back his stolen technology. They’re both very funny. Rockwell has some great dance moves throughout the film too. Matt LeBlanc is also very funny as Lucy Lui’s clueless actor boyfriend, and Luke Wilson also turns up in one of his earlier roles as a love interest for Cameron Diaz. This film also reminded me of the time when Tom Green was famous for five minutes. He turns up as Barrymore’s kooky lover who helps the girls out when they’re in a bind. He is amusing in a small role.

This film is pretty average, it spends most of its time putting the three leads in the tightest clothing possible. It describes itself as an ode to feminism, but that couldn’t be further from the truth. A fun supporting cast and some decent action scenes can’t save a film that, at its core, is incredibly hypocritical.

Sally
About 10 minutes into Charlie’s Angels Ben turned to me and asked, “How could she [Cameron Diaz] film this and not feel objectified?” The scene in question features Diaz dancing around in nothing but her underwear and features many close ups of her ass. Quite frankly, it was a relief discovering that he felt that way. It can be exhausting being the only one writing about feminism, racism, etc., etc., on this blog, and I worry that I often come across as a real stick in the mud. Maybe I do, but at least I’m not alone this time.

I have some vague memories of watching reruns of the original Angels television series that inspired this movie, but I’m not really familiar with the series. I’m going to assume that my parents’ description of it being “jiggle TV” is accurate based on this movie, though. It has to be. There is no way three women who I always thought of as being intelligent (Drew Barrymore, Lucy Liu, and Cameron Diaz) would have made this the way they did if they weren’t channeling the spirit of the original. I have to believe that this is meant to be a spoof, because the only alternatives are that these ladies were either badly duped or are incredibly stupid.

I’ll give credit where it is due: the action scenes are entertaining, albeit completely unrealistic. I also appreciated Barrymore’s insistence that the Angels not use guns, because that does set the movie apart from most action flicks. But everything else here ranges from ridiculous to insulting. The ladies mostly rely on their sex appeal to get information, which is a shame because at least two of the characters appear to be smart and I don’t see why they must always resort to flirting. The few times when the women actually show some intelligence or kick ass-ness it’s negated by the fact that they are wearing skin tight and/or barely there clothing. Must they always be dressed so sexy? Most of the time it makes no sense, and other times it would also be impractical or borderline dangerous.

Then there are the small things… Lucy Liu’s cover story is that she’s a bikini waxer. Really? You can pick any fake profession to hide the fact that you’re actually a detective and you go with bikini waxer? (Also, why so specific?) Cameron Diaz goes gaga over a guy to the point that it almost affects her work. I guess in this instance the “almost” is important because she’s able to free Bosley while having a phone conversation with her paramour. Women can have it all… I guess. Finally, Barrymore does let her love life affect her work by sleeping with their client. This alone wouldn’t be so terrible– everyone makes mistakes in dating– except that it becomes a big plot point in the sequel that her character has a knack for picking terrible boyfriends. Ugh.

I really wanted to like this movie, but it’s damn near impossible. Yes, they’re reviving a TV show that was itself ridiculous, but this sort of camp could have been recreated in a much less insulting way.