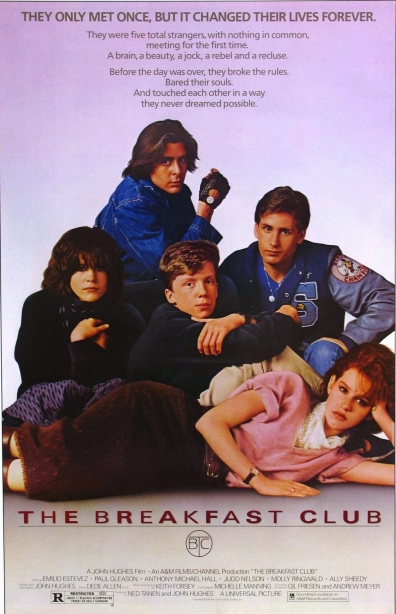 We watched this movie out of order to accommodate a new guest reviewer. This happens to be Tonia’s favorite movie, so it was worth the wait!Tonia
I have to disclose right away that I don’t know how valid my review is as The Breakfast Club is my favourite movie of all time. Five students who are meant to be completely different from each other stuck in detention on a Saturday for 8 hours – how could it not be good! I have watched this movie 3 or 4 times a year since I was in school, and what I find most interesting is that my understanding of the movie has changed so much over the years. Firstly, lets cover the characters, or more so, their stereotypes… the brain, the athlete, the basket case, the princess, and the criminal.

At the beginning of the movie you see the characters behave exactly as they are perceived by Mr Vernon and by each other, and as the movie goes on you come to understand why they behave the way they do. The whole movie you watch these kids try and prove to one another that they are nothing alike and that no one could possibly understand the life they are living. But eventually – after some great Socratic questioning – they come to realise that they all have some important things in common, 1. the stereotype they fit does not make them who they are as a person, 2. the horrible relationship they have with their parents, 3. the overwhelming pressure they feel, and 4. the absence of actually love from the people who are meant to love them the most. Some may disagree with the last one, and be all “damn psychs and their damn psychobabble”, but as I have gotten older I have come to notice that some of the characters had parents who treated them horribly and some had parents who would let them get away with murder; but ALL of them had parents who were emotionally absent. To me this is a key theme in the movie because, basically, it shows us just how much your parents can screw you up, and that these kids really were a product of their parents, their environment, their teachers…

I am a big fan of ‘dialogue movies’ that make you think about what impact people have on the world and so on, and the breakfast club definitely does that. Every time I watch this movie I spend a good hour afterwards thinking about what the movie told me this time around. This movie has such a powerful impact on me…intellectually? I don’t know if that the right word for it but either way it makes your mind work a little harder, and I love that. BUT if none of that works for you that’s fine, because when I was 15 years old I use to watch this movie and love it so much because of how sexy John Bender is (what does that say about me), and how hilarious all these characters were, and I loved that in just 8 hours these 5 kids from different groups made each other better, more understanding human beings, and that they became friends! Yay Happy ending!

So my rating is an A, but I won’t give it a plus because nothing is perfect and that’s okay. To be honest even writing this review has made me realise that this movie has had a major impact on who I am as a person. You never think an hour and a half movie from 1985 can do that to you but there you go – it’s just that damn good… *cue Simple Minds*

Ben
This is such a simple movie, but it really captures everything about high school, especially in the 80s and 90s. It perfectly captures the humour and drama involved in attending high school. There are many films that have been made that try to chronicle high school life, but The Breakfast Club is the gold standard they all aspire to reach.

The film is set in a high school on a Saturday. Five students gather there for detention. They all received detention for a variety of reasons, and they are all members of a separate high school clique. Claire (Molly Ringwald) is a princess, Bender (Judd Nelson) is a criminal, Andrew (Emilio Estevez) is an athlete, Brian (Anthony Michael Hall) is a brain and Allison (Ally Sheedy) is a basket case. These five people have nothing in common, except for the fact they all have detention on Saturday. The movie follows their day, as they are initially reluctant to let go of their socially prescribed personalities, but eventually open up to discover they can be more than whatever their school social status dictates.

Writer/Director John Hughes was a master of telling tales about high school students. He has given us some of the best young adult films of all time. He was the brains behind Ferris Bueller, Sixteen Candles, Weird Science, and Home Alone. He is able to write believable dialogue that teenagers would actually use and it doesn’t feel forced at all. You believe these five kids in detention really do attend high school. They talk like they belong, which sounds easy, but you’d be surprised how difficult it is to make believable dialogue in a script, especially one that contains only teenagers. As someone who has attempted script writing, it is a lot harder than it seems to make dialogue feel fresh and real.

Hughes is able to capture the humour, drama and issues we all faced during our school years perfectly. This is a great film, which can be watched over and over again. The dialogue is great and the young cast is terrific. I also have to mention the brilliant soundtrack, it is full of several 80s classics and well worth a listen.

Sally
The part of The Breakfast Club that struck me the most was the following exchange:

Principal Vernon: Carl I’ve been teaching for 22 years, and each year….these kids get more and more arrogant!

Carl the Janitor: Awww, bullshit man. Come on Vern, the kids haven’t changed, you have!

This movie may be almost 30 years old, but it’s clear why it’s considered a classic of the teen genre. Quite simply, the kids haven’t changed all that much. They still fall into the same stereotypes, still roll with the same cliques. They still have a general disdain, if not outright hatred, of authority figures. They’re still making the same basic mistakes, they just live in a time when those mistakes can go viral on a global scale instead of being confined to the high school hallways.

This is actually the first time I’ve seen The Breakfast Club the entire way through. I usually pick it up somewhere near the end, so I’ve seen Judd Nelson thrust his fist into the air at least a dozen times without much inkling as to why he seems so triumphant. And honestly, after watching the movie, I still don’t completely get it.

Maybe I’m too old and cynical, but I don’t get the sense that these kids’ lives would have dramatically changed at all as a result of their shared detention. Let’s be honest here: they won’t be friends come Monday; they practically say so themselves. Claire (Molly Ringwald) will cave to peer pressure and deny ever kissing Bender (Judd Nelson), or alternatively, she’ll date him for awhile to piss off her dad and dump him when that gets boring. Andy (Emilio Estevez) might try to make it work with Allison (Ally Sheedy), but their love will last about as long as her make over. Which doesn’t the whole make over angle go against the moral of the film, what with learning to be confident in who you are and accepting others for who they are? Maybe the only kid who will really grow from the experience is Brian (Anthony Michael Hall). He may have been too shy to make a new friend, but I could see him calling Allison’s name as she walks on by. A bit of a cliche that the only two unpopular “weirdos” in the group are the ones who seem most likely to become actual friends.

But perhaps this is the whole point of the movie? That high school is hard, and everyone has problems. The stereotypes and cliques are camouflage donned just long enough to get you into college or the real world, where you can safely be yourself with much less ridicule. You probably had more in common with your classmates than you thought, but you never realized this because you were so wrapped up in your own drama and the false notion that popularity and fitting in is everything. Maybe just knowing that other kids don’t have perfect lives is enough to get through these four years.

Still, it would have been nice to think that these five could have defied their friends and sat together in the cafeteria once in awhile. It’s just highly unlikely.