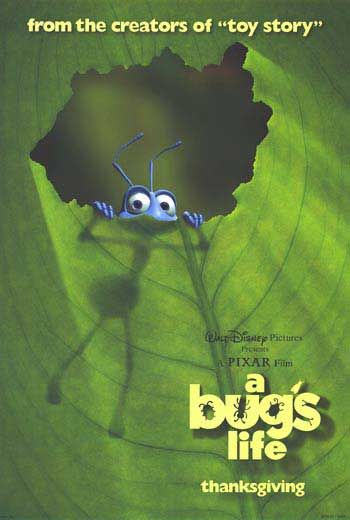 Sally
I have a real soft spot for A Bug’s Life. It often gets overlooked in the discussion of Pixar films. It’s not flashy like The Incredibles or Wall-E. It doesn’t have the emotional pull of Finding Nemo or Up. It doesn’t lend itself to a lot of cool toys like Toy Story or Cars. But it’s a sweet story on par with Ratatouille or Monster’s Inc, with gorgeous visuals that rival those of Brave despite being 14 years older.

This is a clever take on Aesop’s fable “The Ant and the Grasshopper.” In the world of A Bug’s Life the grasshoppers have been re-imagined as ruthless bullies rather than just lazy loafers. They seem a bit like the mafia/motorcycle gang, demanding payment from the ants in exchange for their protection. The ants are industrious hard workers, as in the fable, but lack creativity and courage. The only ant who does think outside the box is Flik, who is viewed as a walking disaster by the rest of his colony.

There are a lot of great lessons in this movie, first and foremost the importance of being yourself. The ant colony eventually realizes the genius of Flik’s weird ideas, and celebrates his individuality. They also learn how to stand up to the grasshopper bullies, and the grasshoppers learn that you shouldn’t take advantage of others (I assume… the leader of the gang dies, but maybe he learned his lesson in the moments before getting pulled apart?).

I also love this movie because it has a great ensemble voice cast that features the talents of people I grew up watching on television: Julia Louis-Dreyfus (Seinfeld), Dave Foley (Kids in the Hall, NewsRadio), David Hyde-Pierce (Frasier), Richard Kind (Mad About You), John Ratzenberger (Cheers), Brad Garrett (Everybody Loves Raymond), Madeline Kahn (Cosby, in addition to her many movies). It also features Dennis Leary, Kevin Spacey, Phyllis Diller, Roddy McDowall, and a very young Hayden Panettiere. It was impressive for Pixar to get the likes of Tom Hanks and Tim Allen in their first outing, but the talent collected for A Bug’s Life isn’t too shabby. It really speaks to the brilliance of Pixar– tell a great story and top notch actors will want to be involved.

Also, the real villain of this film is a bird. The ants may only have four limbs, but Pixar definitely gets the terror of swooping avians correct.

Ben
This is Pixar’s most underrated movie, in my opinion. It never gets the love that their other films like Toy Story, Finding Nemo or The Incredibles receives, yet its quality is just as good. This was Pixar’s second full length feature after the original Toy Story film. It focuses on a colony of ants who are forced to pick food for a nearby gang of grasshoppers. The animators have steered clear of humans again for this film. It was one thing Pixar couldn’t quite get right in the early days, one of the only negatives I can say about the original Toy Story film is that the human characters don’t quite look right. Everything else about the animation is sublime, but there is something lacking with the humans, so for this film, Pixar keeps the story focused on bugs and nothing more. Pixar would eventually get much better at doing humans, one of their more recent films, Brave, has done a great job of animating human characters. The main character of Brave, Princess Merida, has a flowing tangled wave of red hair which would’ve probably been impossible back in the early days of these Pixar films.

A Bug’s Life revolves around a worker ant named Flik (Dave Foley), who considers himself an inventor. When one of his new inventions ruins the offering that the ants have spent months gathering for their feared enemy, the grasshoppers, Flik convinces the ant queen (Julia Louis Dreyfuss) that he will venture out, away from the safety of their anthill, and find some warrior bugs to defend them against the grasshoppers and their scary leader Hopper (Kevin Spacey). Flik ends up finding some out of work circus bugs who believe Flik is offering them a chance to do a show at his anthill. A request they enthusiastically accept, only to realise the colony expects them to fight grasshoppers. Flik has to devise a way for the circus bugs to save face and defeat Hopper’s gang before any of the other ants find out he brought them circus performers and not warriors.

There are some fantastic messages in this film. Themes about standing up to bullying, inventiveness and courage are really good things for anyone to hear, especially the younger audience hat this film is directed at. The characters are funny and have a lot of heart. The circus bugs especially are the comic relief in this film. A male Ladybug (Dennis Leary) with anger issues, a stick bug (David Hyde Pierce) who is tiring of being a prop in circus skits and a giant German caterpillar named Heimlich (Joe Ranft) are definite highlights of this film.

As I’ve said before, I feel like this film deserves more love than it gets. People tend to praise Pixar films and forget this one a lot of the time. It is not fair on A Bug’s Life because it is just as great as the others. The animation quality is superb, the story has heart and the voice actors are charming and funny. What more can you ask for in a film, especially one aimed at children.