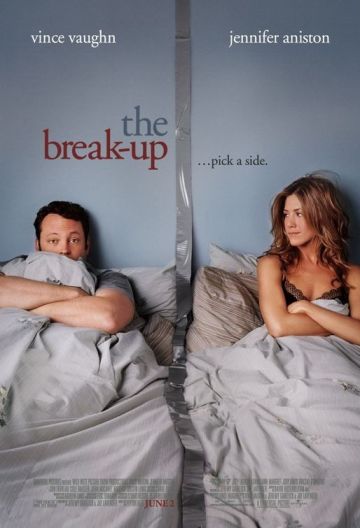 Sally
The Break-Up is a comedy built around a wacky predicament: Brooke and Gary are a couple who break up, but are forced to continue living together in a bid to gain control of their pricy condo. This is one of only two believable parts about the movie. Real estate is a big investment, and loosing a major asset like that would be a big financial blow. Beyond that this movie is nothing more than an hour and a half of typical sitcom-level gender stereotyping and escalating provocations that reach ridiculous levels. The only refreshing bit is the ending, which was the second believable part of the movie.

Seriously, the portrayal of men and women here couldn’t be any more typical or insulting. It’s like the writers made lists of the most negative traits commonly attributed to each sex, and then gave the main characters every single item on the list with maybe one redeeming quality each. You know, to balance things out. The result is that I ended up hating both characters within the first 15 minutes and didn’t care what happened to either of them. Vince Vaughn is selfish and obnoxious, Jennifer Aniston is uptight and manipulative. He tries to get back at her by buying a pool table and bringing over strippers, she tries to get back at him by dating other men and walking around naked. It’s all so trite and boring as a result.

The only redeeming feature of this movie is the supporting cast. Jason Bateman, Justin Long, and Vincent D’Onofrio are all great. It’s a shame their roles are so small.

Ben
I had a real problem with this film about a couple who breaks up and then attempt to share their living area. The movie tries to make Jennifer Aniston’s character sympathetic, and Vince Vaughn is an obnoxious douche. It fails though, because I really found both characters to be annoying.

The concept here is somewhat believable. It’s not hard to imagine a scenario where it’s more cost effective for a broken up couple to continue living together. As someone who has just purchased property, I can understand what an inconvenience something that would be. What I found annoying was the two leads. Aniston and Vaughn play Brooke and Gary. A couple living in Chicago who have a huge fight about typical sitcom problems. She thinks he doesn’t listen and he thinks she’s too controlling. They’re probably both right.

I’m usually able to look past a pedestrian plot if it still makes me laugh. Unfortunately, this film doesn’t really do that. I’ve never found Jennifer Aniston funny and Vince Vaughn plays the same guy he always does. He was funny in Wedding Crashers, but has gotten stale since then. He has a few good lines in this movie, but there’s not much else here. Which is a shame because the supporting cast is usually solid. Jason Bateman, Jon Favreau, Joey Lauren Adams, John Michael Higgins and Justin Long all turn up here. It’s a shame they’re wasted though by a plot that focuses far too much on its boring leads.