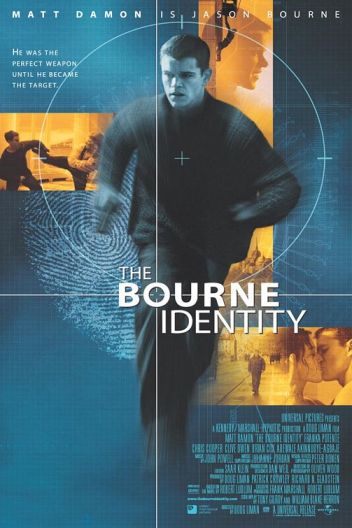 Sally
Try as I might I just can’t get into the Bourne movies. This is probably the third time I’ve watched The Bourne Identity, but I still couldn’t tell you much about the plot. My memories of the movie are much like the movie itself: short little snippets of action that flash by in quick succession.

Not to say that Identity isn’t good. I just personally don’t like it or its sequels much. That being said, I fully acknowledge that without the Bourne Trilogy (plus the one non-Damon installment) we would not have the current incarnation of James Bond, which I really love. The Bourne Identity flipped the action genre on its head by emphasizing character development and story over fight scenes and big explosions– not that the movie is devoid of fighting and big bangs. Even those were redefined by Bourne, with its quick edits and hand-held camerawork.

I don’t know what it is about this movie that I don’t like, because by all accounts I should like it. I enjoy a good action movie, and my one complaint about many is that the plot is either non-existant or laughable. This one actually has a complex, character driven story that is believable. The mystery element draws me in, but somewhere after he fights the assassin in his Paris apartment I lose interest. I can’t put my finger on why this happens. Maybe watching the sequels will shed some light on this.

Ben
This is the film that changed action movies. In a way, I’m a bit sad it exists because now every action movie needs to be smart, and not just contain loud bangs and explosions. There was something very entertaining about going into a theatre and switching your brain off for two hours while Van Damme or Arnie killed people. Sylvester Stallone has brought these mindless action flicks back somewhat with his Expendables movies, but the majority follow the Bourne blueprint, which needs to be an action film for smart people.

Matt Damon is Jason Bourne, he is found riddled with bullet wounds, by a shipping crew in the Mediterranean Sea. He is suffering from amnesia and has no memory of how he ended up in the ocean. Only a small laser projector imbedded under his skin might possibly hold a clue to who he is and how he ended up floating in the ocean. He sets out across Europe to discover who he is, along the way he discovers he may have been an assassin and his former employers, the US government are eager to end him as they assume he’s gone AWOL. Bourne teams up with a young woman, Marie (Franka Potente), and together they have to avoid the many assassins that have been sent after them by the CIA.

Damon is very good in the role of Jason Bourne. He brings a level of respectability to the action genre. In the past, he’d been best known for dramatic fare like Good Will Hunting or Saving Private Ryan. To see him as an action star was very much a out of left field choice for the Oscar nominated star. This is something I’d have expected to see his good friend Ben Affleck in rather than Damon. He excels in the role though. He is believable as the amnesiac spy, something not many of the action stars of the time could’ve been.

Like any good action film, the set pieces are spectacular. There are several fight scenes between Damon and various assassins, and they’re all intense. There is a great scene between Damon and a young Clive Owen who stalk each other in a large field. This is a riveting story, you follow Bourne as he slowly regains his memories and each new one is more surprising than the last.