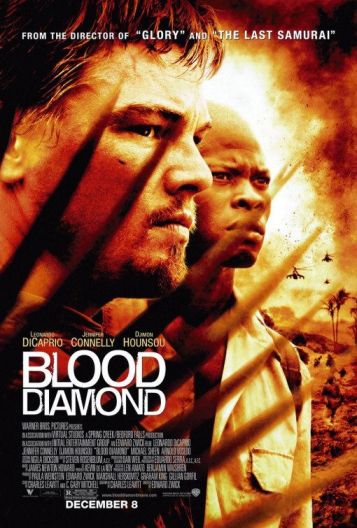 Sally
I once went through a two month period where I would watch incredibly sad movies while home alone and end up sobbing on the sofa throughout the entire film. After viewing Philadelphia, Hotel Rwanda, and Children of Men in quick succession I officially put the kibosh on the sob fest, and never got around to watching Blood Diamond.

This is definitely one of those movies that people have recommended to me countless times due to its subject matter. I’ve always been interested in current events, and am usually the person my family members come to with questions about international conflicts. Conflict diamonds have been on my radar ever since I read an article about how the De Beers company basically created a false scarcity of diamonds in order to drive up their cost, and paired this with brilliant a marketing slogan– “A diamond is forever.”– to increase demand for the gem (I can’t recall the exact article I read way back when, but here’s a good one from 2013. Or you can listen to Stuff Mom Never Told You’s podcast titled “Are diamonds a girl’s best friend?“). It’s only takes a few clicks to get to articles about conflict diamonds, violent warlords, a the exploitation of African nations. (I’d also seen the music video for Kayne West’s “Diamonds from Sierra Leone,” which is a great song/video, and I don’t care what you think, he is a very talented artist.)

So while it seems like I would be interested in watching Blood Diamond, my knowledge of the real life situation actually made me hesitant to watch it. I was convinced it would gloss over the issues, and not do justice to the story. After finally viewing it, I can say that it does a fair job of tackling some of the issues.

Diamond definitely gets the situation on the ground in Africa right. It portrays the violence and fear that millions of people in Sierra Leone lived with with unflinching brutality and candor. A lot of credit here goes to Djimon Hounsou’s performance. He should have won an Oscar for this movie. And speaking of “should have won an  Oscar” actors: Leonardo DiCaprio should have at least one Best Actor statuette for this. I don’t know what he’s done (or won’t do) to whom that’s kept him from winning the big prize, but it’s becoming a frustrating joke that he keeps getting passed over.

The film also does a good job of placing a large portion of blame on the legitimate diamond companies who knowingly imported dirty gemstones. However, the movie glosses over the concept of inflated prices and falsified scarcity, which are, in my opinion, the real culprits in this whole mess. Although, I doubt that simply knowing the true worth of a diamond would sway enough minds to drive prices down. While Blood Diamond certainly made people more aware of conflict diamonds, it hasn’t decreased their demand. It’s created more savvy consumers, but has done nothing to dispel the myths or allure surrounding the gemstone. Maybe it’s just too much to ask of a single film.

Ben
I really can’t understand why this movie wasn’t praised more when it was released. I thought it was one of the best movies I saw when it was released in 2006. The acting is intense and powerful. Leonardo DiCaprio is fantastic, as he usually is. This was the first movie where I believed he was a grown up. Before this he’d played mostly younger characters in films like Titanic or Catch Me If You Can. This role, and his great turn in a The Departed, convinced me that Leo could be more than a pretty boy teen idol. Since then he’s gone on to become my favourite actor. He’s one of the few actors now that I must see a movie if he’s in it.

As great as DiCaprio is, this film is built on the performance of Djimon Hounsou. His role as Solomon Vandy, a father desperately searching for his missing family in war torn Africa is amazing. He was deservedly given an Oscar nomination for his performance and I still can’t figure out why he didn’t win. His performance is one of the best I’ve seen.

Solomon Vandy is a fisherman living in Sierra Leone with his wife and two kids. His small town is over run with rebels who kidnap his son and force Solomon to work in their diamond mines. The camp is attacked just as Solomon finds a giant pink diamond. He is able to hide it just before he is arrested by the government forces, who assume he is a rebel and not a prisoner. In prison, he meets Danny Archer (DiCaprio) who offers to help him out of prison and find his family if he splits the profits from his hidden diamond with him. They set out with the help of American journalist Maddy Bowen (Jennifer Connelly) to find the pink diamond and Solomon’s family.

This is a powerful film that isn’t afraid to show the brutality of life in these war torn sections of Africa. There are several shots of the rebels torturing their prisoners, even slicing off their hands so they’re unable to vote in upcoming elections. It it sometimes difficult to watch, but the performances make it compelling. Hounsou is brilliant, his scenes with his son are particularly moving. His son is brainwashed by the rebels and forced to become one of them. When his father finds him, you really feel his pain and eventual happiness as his son comes back to him.

The only negative I can say for this film is that sometimes it is difficult to see why characters make the decisions they do. For instance, Jennifer Connelly’s character seems to hate DiCaprio and is reluctant to help him and Solomon, but she changes her mind so quickly. It is not really explained why she does this, the audience is expected to believe she just had a change of heart. This happens a few times throughout the film, by multiple characters. The performances make this very much a minor issue though. Everyone in this film performs so well in this fantastic film about the very real problem of illegal diamond trades in Africa.