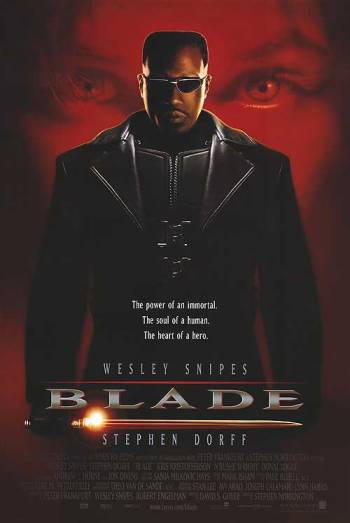 Sally
It’s easy to be sick of vampires in 2014. It’s hard to remember a time when they didn’t dominate movie theaters, television screens, and book shelves. They’ve had their moment in the sun (pun intended), and are a bit boring at this point. I find it hard to get excited over blood suckers, even ones that pre-date my vampire fatigue.

That said, Blade is pretty cool. A bit ridiculous at times, but it is based on a comic book. Some amount of ridiculousness is to be expected. It’s also rather funny at times, which is a surprise given how dark the film is.

I think what stood out the most is that the lead character is black. Actually, not so much that he’s black, but that this has absolutely nothing to do with his character. Blade’s defining characteristic is that he is a human-vampire hybrid. A “daywalker” who possesses all of a vampire’s strengths and only one of their weaknesses– a thirst for blood. The color of his skin is unimportant. This is incredibly refreshing to see, but disappointing that it hasn’t lead to more action/comic book films starring people of color. (I mean, how many of the lead vampires in True Blood are African American? Suspiciously few given that they live in Louisiana.)

This movie is also very bloody and violent. Makes sense for a vampire flick, but doesn’t necessarily jive with comic book films. I’m glad the filmmakers didn’t pull any punches here. The movie needed to be gory and violent. How can a proper vampire hunter movie not be? However, given how campy some of the Batman movies became, it’s a wonder somebody didn’t try to make this more kid/teen friendly. I’m guessing Blade benefited from the fact that it’s less well known than other books in the Marvel Universe. If it had been even a little more popular, there might have been pressure to skew younger.

Ben
This was the movie that reminded everyone that comic book films can be cool. Batman & Robin had left a bad taste in everyone’s mouths a year earlier, putting comic book films on the back burner for a while. Then Blade came out and we saw that comic book films could be fun, violent, and action packed once again. It’s also worth mentioning that this was the first film based on a Marvel comic since Howard the Duck ten years earlier. In a way, Blade was the trailblazer that led to the X-Men films, Spider-Man, and The Avengers.

Wesley Snipes stars as the vampire hunter who is a half vampire, half human hybrid. He is known as daywalker among the other vampires because he does not share their weakness for sunlight. He does still crave human blood, but he takes a special serum to keep it in check. He hates vampires because they killed his mother and has vowed to destroy them all. Snipes is great in this role. He is a badass and some of the fight scenes are spectacular, particularly the opening in a vampire nightclub. It is a great scene that introduces Blade so well.

Snipes is joined by Kris Kristofferson as his weapon maker, Whistler. His family was all murdered by vampires also and he has recruited Blade to help him kill them all.

The main vamp baddie is Deacon Frost (Stephen Dorff), he is a vampire who believe they should ruling the humans and goes about making that happen through some convoluted prophecy involving a blood god. It’s all a bit technical, but it is a good enough story that you buy it, as long as you get to see Snipes kick some ass. Which you absolutely do. The action is great in this film and worth seeing just for that.