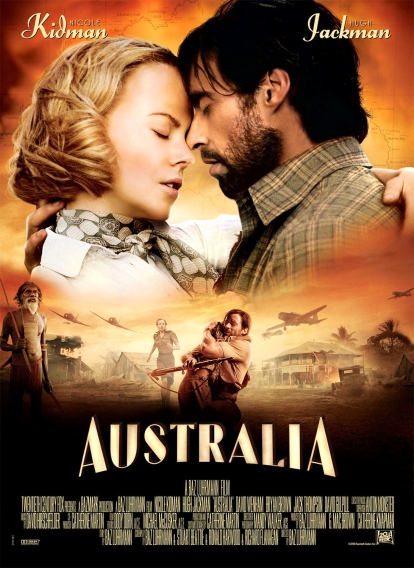 Sally
I will give Baz Luhrmann this: he knows how to make a dramatically beautiful movie. Now, if he could only make one with real substance and depth, then I’d be truly impressed.

The big problem with Australia is that it’s unoriginal. It has the same basic plot as Out of Africa. Only Nicole Kidman is no Meryl Streep and Hugh Jackman is no Robert Redford (though he comes damn close at times). I had hopes for this film. It’s set during the build up to WWII and deals with the “Stolen Generations,” the forced removal of Aboriginal and Torres Strait Islander children from their parents by the Australian government agencies from 1909 to the mid-1970s. However, the discussion of this history is fairly shallow. I never expected this to be on the same level as a film like Rabbit Proof Fence, but it would have been nice to see this issue treated with less of a fairy tale ending, especially in a film that would reach a wider audience.

Luhrmann likes telling love stories, so that’s mostly what you get here. Lots of Kidman swooning over Jackman (which I won’t lie, there was a fair amount of swooning going on in my living room), the two staring longingly at each other, and a few (awkward) sex scenes. There is also a love story of sorts between Kidman’s character, Lady Sarah Ashley, and a young Aboriginal boy, Nullah (Brandon Walters), who she cares for after his mother dies. And I suppose the entire film is a love letter to Australia itself. Like I said, Luhrmann loves love.

Cinematically, this is a gorgeous film. Luhrmann excels at creating beauty, and even the bleakest outback farm is rendered gorgeous through his lens. However, this isn’t enough to make up for a weak story and mediocre acting. Kidman and Jackman do OK with what they are given, but most of the supporting cast are reduced to one-dimensional caricatures. The real standout here is Brandon Walters, who was just 11 years old while working on Australia. For such a young kid to perform so well in a film this big is quite an achievement. It’s a shame he hasn’t done much acting since this.

Ben
I’m writing this review with there still being half an hour to go. I can’t imagine the final 30 minutes will change my opinion of this film. It is ordinary, even for an Australian film. There were already low expectations for this film going in. I’ve never liked Baz Luhrmann, I despise Australian films, and I can’t stand Nicole Kidman. She is an ice queen that I find terribly overrated. I really like Hugh Jackman, but let’s be honest, he’s made maybe two good films. Outside of X-Men 2 and The Prestige, most of his other stuff has been crap. Expectations were low going in, and this film failed to meet even those.

Nicole Kidman plays lady Sarah Ashley, an icy (typecast much??) English aristocrat who travels to the Australian outback to meet her husband and hopefully sell their cattle farm. When she arrives. Her husband has died and she must run the cattle farm on her own. I think that’s what’s going on anyway. I’ll be honest, I drifted in and out. Jackman plays the Drover (no real name, he’s only referred to by that name), an Aussie larrikin who ends up helping Sarah with her cattle. He also has a penchant for posing shirtless with large buckets of water while showering. Ordinarily I wouldn’t comment on this, but it’s so obvious that this scene only exists for people to perve on Jackman I had to call bullshit on it.

Kidman becomes attached to a young aboriginal boy called Nullah (Brandon Walters) and becomes his adopted mother. That’s where this film becomes overly long and convoluted. The film is trying to tell two or sometimes three different stories and can not explore any of them up satisfactorily, even with an extended run time of nearly two and a half hours. If the movie had focused on the cattle farm, or Kidman’s relationship with Nullah, or even the attack made on Darwin during World War II (the film’s climax), then this may have been a lot better. Luhrmann gets greedy though and tries to cover everything. The end result is a bloated mess that doesn’t engage the audience at all.

The film is pretty, there is some spectacular cinematography featuring the Australian outback. Other than that though, the film is very ordinary. Even Hugh’s wet posing can’t save it from being a huge debacle.