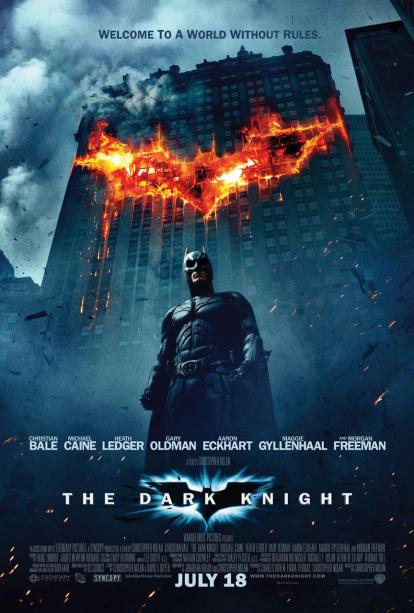 A From The Abyss to Zoolander first: a guest reviewer! We’ll let our friend Alex start off the post:

Alex
I was feeling pretty special that for my visit to the Abyss to Zoolander house during Batman week, they were going to make sure I could watch the best one– “Batman for grownups” as Ben said. Batman: The Dark Knight has lots of actors I like in it – Aaron Eckhardt, Maggie Gyllenhaal, Gary Oldman and Heath Ledger are all people I would pay money to see. I also enjoy comic book movies –their classic themes make them a little like Greek mythology to me. Michael Caine I am ambivalent about. I wanted to have a rant about annoying cockney accents – like why is it that Christian Bale and Gary Oldman can do such good American accents, but Michael Caine can’t do cockney? Then I researched and found out that is actually how he talks (https://www.youtube.com/watch?v=rX0F3kY3uxU) – wow.

This movie is pretty dark, it lives up to the hype with the Joker identifying himself early on as a technically brilliant bad guy with no loyalties, no morals and no big plan or goal beyond a desire to cause chaos. But the fantastic scenes of violence and destruction start to get a little depressing by the end – it just seems so unrelentingly hopeless and bleak.

Coming into a trilogy at the second movie, I understand that I missed a bit of backstory but I did want a bit more of the characters and a little less of the Joker messing stuff up – I liked the cover story of Bruce Wayne being a self-absorbed, sleazy playboy, the detective work and gadgets are cool, and I wanted to see more of his chemistry with Rachel – but there wasn’t a lot of sizzle in any of the love stories in this movie – Rachel is just a tragic character, and her choice between Batman and Harvey is rushed through in between long and detailed scenes of incredible carnage. I felt like the movie could have finished earlier but apparently we needed to see every character reduced to rubble, no one comes out unscathed. Yes, I enjoyed the movie and feel like I need to see the next chapter but am missing some level of resolution or meaning within this movie.

Sally
Here’s a spot where the alphabetization gets a bit murky. Technically this should be in the Ds, but you wouldn’t expect us to watch Batman Begins and then watch several dozen other movies before coming back to this one, would you? I have also tagged this under B for Batman and D for The Dark Knight. Just trying to cover all the search related bases.

When The Dark Knight was released I remember my mom being shocked that people would take their kids to see this movie. In their defense, I don’t think anyone thought it would be as dark as it is. Yes, Batman Begins established the franchise as one for adults, but that movie is still not completely inappropriate for most kids. It’s loud and scary at times, but if you think about it, Batman never directly kills anyone (he opts not to save Ra’s al Ghul), a code established in the original comics. The moral themes will go over most kids’ heads, but this isn’t a movie that’s going to scar a 10 or 11 year old for life.

Dark Knight however, is not one I’d let a child see for the villains alone. The imagining of Harvey Dent/Two Face in this film is quite disturbing. I remember being shocked and a little grossed out when I saw it on the big screen, and I think a lot of kids might find him too confronting. That said, it finally does justice to the character, by giving him a compelling backstory and a more than adequate build up to his fall from grace. Then there’s The Joker. A lot of well deserved praise was given to the late Heath Ledger for this role. He is creepy, disturbed, and violent. The humor he brings to the character only makes the villain more deranged. While I love this vision of The Joker, he’s hard to watch. Ledger’s portrayal makes me squirm in a good way, but it is way too scary for most young kids.

In fact, I would argue that Batman Begins is to The Dark Knight what Batman was to Batman Returns. Both Begins and Batman were huge departures from how people used to view this character. They both moved Batman & Co. away from its campy, comic roots, but were ultimately still kid friendly. But in their sequels, the tone became darker and the violence more gruesome. Suddenly Batman was for adults, and a lot of parents hated this.

This movie had a lot to live up to. Not only was it’s predecessor a huge hit, but it takes on two of the most well known and over-the-top Batman villains and successfully plants them firmly in a de-cartoonified Gotham City. The fact that The Dark Knight rises to the occasion is surprising enough, but then it slaps you with a great ending that leaves you wondering: what’s next for Bruce Wayne? How can they possibly top this?

That’s quite a feat for a sequel.

Ben
I understand that this film starts with D, but I thought it would be silly to watch Batman Begins and then not go on to the sequels.

I loved this film when it first came out. This was the first film I can remember being upset the film ended. I was that enthralled by it I was angry it had to end. This film takes what was a fantastic movie, Batman Begins, and continues it with a sequel that is just as brilliant as its predecessor.

The all star cast is back. Christian Bale returns as Bruce Wayne/Batman and is still great in the role. He is the first actor to be a good Batman and Bruce Wayne. All of the previous actors to play Batman had been found wanting in their portrayal of either Bruce Wayne or Batman, or in the case of George Clooney, they sucked at both. Bale is perfect as Bruce Wayne, he plays the role well. Nolan’s films really play up the fact that in public life, Bruce is a massive wanker so there is no suspicion he might be living a double life as Gotham’s protector. Gary Oldman, Michael Caine and Morgan Freeman all return to their roles from the last film, and they’re all brilliant. I’m still amazed Nolan was able to assemble this cast, they’re really fantastic.

There are a few new additions to the cast, Aaron Eckhart and Heath Ledger. They play Harvey Dent and the Joker respectively. Eckhart is great in the role and it is really fulfilling to see the fall of Harvey Dent on screen after it was pretty much ignored when Tommy Lee Jones played the character in Batman Forever. Eckhart is able to believably play the character of Harvey Dent. There are times when he needs to be a charismatic politician, but he is also required to be the deadly villain with a split personality Two-Face. Eckhart is fantastic playing both sides of the Dent character.

Of course the most hyped addition was Ledger. How do you fill the shoes of a character that was universally praised the last time he was portrayed by Jack Nicholson? Ledger fills the shoes nicely. He is terrifying as Batman’s arch nemesis, in a way Nicholson never could be. Ledger died not long after finishing this movie, creating massive hype for his portrayal of the crazy clown villain. Ledger delivered everything fans could want from the role and more. Not bad for someone who, before this movie, was best known for playing a gay cowboy.

This film is brilliant. My only complaint is that it is somewhat too dark. I still believe Batman should be for kids as well as adults, but this film is not appropriate for some children. This is still a comic book film at heart and should be accessible to everyone. Ledger’s portrayal of the Joker is quite frightening at times, and probably not suitable for all ages. This is not a huge issue for me as I’m legally a grown up, but I can see it being a problem for some parents.