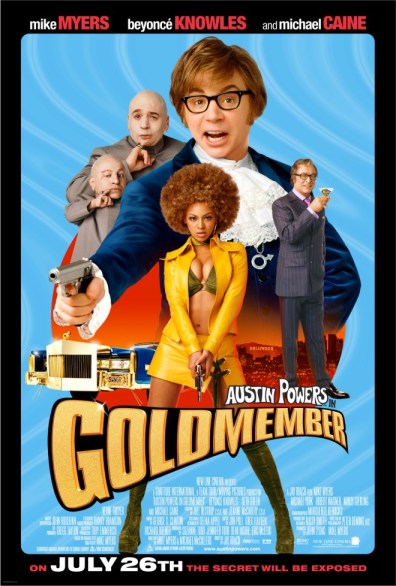 Ben
I found myself laughing at this a lot more than I expected. When the third installment of the Austin Powers series was first released, I remember being really disappointed. I have a feeling this was probably due to my own high expectations, though. The second Powers film is one of my favourite comedies, so this one had a lot to live up too. The third one never reaches the comedy levels of the first two films, but there is fun to be had here. Mike Myers really knows what his audience wants. After two adventures as the secret agent from a different time, he’s very comfortable for this third go around.

This is definitely Myers show, but he’s ably supported by the rest of the cast. Michael Caine is a great addition as Austin Powers father, Nigel. He is exactly how you’d expect the shagadelic secret agent’s dad to be. He is charming, but also really obnoxious and rude, just like his son. Mini Me is also back and is fantastic as Dr. Evil’s midget clone. The only weak link here is Beyoncé Knowles as Powers love interest, Foxy Cleopatra. She is out of her depth here, she’s neither funny or pretty enough to justify her role in this film. At least Liz Hurley was beautiful in the original.

Myers again plays multiple roles in this film. In addition to Austin, his nemesis Dr. Evil, and gigantic henchman Fat Bastard, Myers also plays the new villain Goldmember. Goldmember is a Dutch nightclub owner who turned his private junk gold in a smelting accident. Dr. Evil uses Goldmember to help him get Austin Powers in the 70s. Their interactions are really funny. Goldmember has a really strong Dutch accent and it’s very funny to see him and Dr. Evil communicate with each other. Dr. Evil rarely understands what he’s saying and it’s very amusing.

I enjoyed this film a lot, despite not reaching the heights of the first two installments this is still a very funny film.

Sally
I could go into all the reasons why this is a great movie, but it will be quicker to list it’s one flaw: Beyoncé.

Seriously, this movie is so good except for her. The jokes are spot on. The plot is a fun mix of the previous two. We are treated to some of Power’s and Dr. Evil’s backstory. Michael Caine is delightful as Austin’s distant father. The celebrity cameos are particularly inspired. So much is right, but Beyoncé’s presence nearly cancels it all out.

It’s not entirely her fault. She was only 21 when Goldmember was filmed, so very young to be co-starring in a highly anticipated sequel. This was only her second foray into acting, with her previous experience being a single tv movie for  MTV. She is simply out of her league here.

Still, this is a solid movie, and for me, an improvement on the second. I’m optimistic that the rumors of a fourth Austin Powers film will be more than just rumors. After all, Hollywood has been resurrecting 90s franchises left and right lately, so why not Austin?