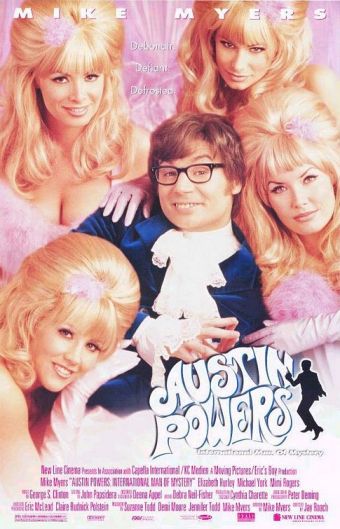 Ben
Austin Powers was one of the most popular comedies of the 90s. It’s easy to see why Mike Myers sexy secret agent connected with audiences. He’s really charming and the movie is really funny. There are some really random jokes in this movie that, while completely out of place, will make you laugh out loud. I really liked the cutaway scenes to show a wife learning of her henchman husband’s death.

For those that don’t know the plot, Austin Powers is a secret agent in the 60s who is frozen in ice in case his nemesis Dr. Evil ever returns. He does return, and Austin is thawed out in the 90s to defeat him. Watching Austin Powers deal with this new 90s world is very funny. He struggles to deal with the fact earth is no longer about promiscuity and free love anymore. It’s very amusing.

Myers also plays the villainous Dr. Evil and he is my favourite part of this film. He has some great lines and mannerisms throughout the film which I won’t go into detail here. Just trust me that he steals the movie. His interactions with his newly discovered test tube baby Scott Evil (Seth Green) are particularly funny.

Look, Austin Powers isn’t everybody’s cup of tea and I think most people know by now whether they will like this type of film. Any teenager in the 90s likely saw this and loved it. I know my senior year in high school was mostly spent telling people they were shagadelic, followed by a ‘YEAH BABY, YEAH!!!’

Sally
Groovy, baby! I’ve been looking forward to re-watching this series. These movies were huge when I was in high school, and surprisingly they’ve aged well. This is exactly the type of stupid humor I enjoy.

What’s not to like about this movie, really? Visual gags and jokes that are still funny almost 20 years later (God, is this movie that old?). A fun soundtrack featuring everyone from Burt Bacharach to Susanna Hoffs, plus Mike Myers’ “BBC” over the end credits. James Bond references, like henchman “Random Task” and sexpot “Alotta Fagina,” as well as about a million other costumes, sets, and one liners. Elizabeth Hurley, one of the most beautiful women on the planet, and Mike Myers, one of SNL’s best and most successful alumni. Plus shout outs to everything from Rowan & Martin’s Laugh-In to A Hard Day’s Night to The Avengers (British TV show, not Marvel movie).

I also love the “fish out of water” plot line. The 90s could not have been more different than the 60s, and it’s hilarious watching Austin and Dr. Evil trying to cope with the changes. Actually, I wonder if Captain America would have coped better after he defrosted with the assistance of Elizabeth Hurley. I don’t think it would have hurt.