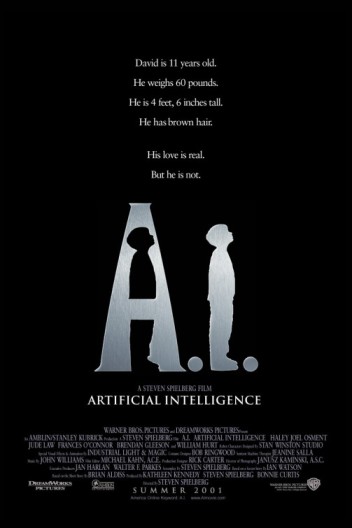 Ben
Unlike most of the other crappy films in my DVD collection, I actually know why I own this. When I was at university, I had to write an essay on “Pinocchio” and used this tale of a robot yearning to become a real boy as a reference. Steven Spielberg made this film as a tribute to his recently deceased friend, Stanley Kubrick. This was meant to be Kubrick’s next film before he passed, so Spielberg decided to complete it for his friend. You can tell this was meant to be a Kubrick film, it doesn’t feel like something Spielberg would make at all.

The film doesn’t seem to know what it wants to be. It’s trying to be a horror, thriller and action all at the same time, but then Spielberg will make you think it’s a kids movie too. The end result is a jumbled mess that has no identity of its own. It’s far too long and by the time it ends, you feel like it should have ended about an hour earlier. The film is nearly two and a half hours, it’s much too long.

Haley Joel Osment stars as David, the robot who wants to be human so he can gain the love of his mother. He was the flavour of the month when this was made as he’d completed The Sixth Sense not long before this came out. He is sometimes really menacing as the robot boy. When he does some acts throughout the film with almost no emotion, he is genuinely creepy. If he hadn’t already done so well in The Sixth Sense, I’d say this was a fluke performance from a child actor, but he is very good. I’m surprised he never went on with his acting career. He really disappeared after this film came out, which is very surprising.

I didn’t like this film at all. It’s a jumbled mess that can’t decide if it wants to be a horror film or a kids movie. The only positive I can mention is the special effects. They hold up really well despite being more than ten years old. Even though he’s clearly making this film as a tribute to his old friend Stanley Kubrick, I expect more from Spielberg.

Sally
I watched A.I. in the theater and hated it. It was weird. It was creepy. It was way too long. But I was actually interested to see it again now. I was a teenager in 2001, and my tastes have changed a lot since then. Perhaps there was something there that I missed in my youth, some deeper meaning or moral that I could appreciate now as an adult.

Nope. This movie is still weird, creepy, and way too long. The main difference is that I can now better articulate why I don’t like it.

The main issue with this film is that it tries too hard fill multiple genres. The story was originally adapted for Stanley Kubrick, which explains the exploration of darker themes. At times it borders on horror, with a cautionary thread throughout. However, the project was handed to Steven Spielberg and completed after Kubrick’s death. Honestly, if this had been fully realized by Kubrick as he intended, it probably could have been great. Spielberg’s addition to this film is sugary sweet. He tries to turn it into a fairy tale, but not the scary twisted fable that Kubrick likely would have created. At times it feels like a kid’s movie– one where the young protagonist’s best friends are a sentient Teddy Ruxpin and a sex robot. To top it all off, the film goes on for too long. It feels like it has three endings, the ultimate of which is clearly Spielberg’s.

The movie ends on a note of optimism that just doesn’t fit with its beginning or middle. Nor do I think it needs a happy ending. Far too often Hollywood changes the endings of science fiction literature (A.I. was based on a short story by Brian Aldiss) to fit with movie audience expectation, which ultimately ruins the intention of the original work. This isn’t entirely Hollywood’s fault, though. Movies are viewed as pure escapism, a relief from our everyday problems. We don’t expect films to challenge our thinking the way that literature does. Film criticism isn’t taught in schools as literary criticism is, yet most of us will consume many more movies in our lives than we will books. Audiences want to leave the theater happy, and they don’t want to be preached to. Unfortunately, a lot of literature– and great science fiction in particular– doesn’t fit this mould.

I can say that A.I. delivers some great acting (Haley Joel Osment does a great job carrying the film), and excellent special effects. Here is where Spielberg shines as a film maker: working with kids and creating the fantastical. It’s a shame he didn’t have the courage to delve more into the darker side of humanity.