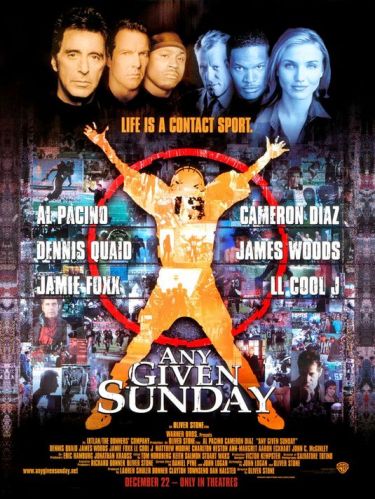 Ben
This American football film is pretty epic. I’m hard pressed to think of a sports film that is as gritty as this attempts to be. Most of the sports films I’ve seen are laid back comedies like A League of Their Own, Caddy Shack, or Major League. The cast is fantastic, led by Al Pacino who is clearly in his element. Most likely because for the first time in years he’s not playing a cop or a gangster. He is great as head coach Tony D’Amato. He’s an old school coach who is forced to deal with a new team owner that wants him to adapt his thinking to today’s standards. Pacino doesn’t take kindly to this interference from upper management and just wants to run his team.

Director Oliver Stone has assembled a solid cast around Pacino. Jamie Foxx is an arrogant young quarterback trying to make his mark in the big time. This was one of Foxx’s first dramatic roles. He’d previously been thought of as a sitcom actor and a stand up comedian but he handles himself well here. Dennis Quaid is great as the grizzled quarterback dealing with injury while Foxx steals his job. James Woods is also good as a sleazy team doctor who fudges medical results so players can get back on the field despite the risk of greater injury. The only weak link here is Cameron Diaz. She tries hard as the bitchy new owner of Pacino’s team, but she’s clearly out of her depth. It’s very evident when her and Pacino share scenes together, he’s just on another level and she can’t go with him despite her best efforts.

Oliver Stone’s directing is another highlight. I really liked the gritty game day scenes and the shots filmed from the perspective of the player’s point of view. You feel scared for the quarterback when you see him staring down a blitz from the opposition. The final game is really suspenseful. I found myself cheering along when touchdowns were scored.

This is a very intense movie, but well worth a watch if you’re in the mood for some terrific acting and direction.

Sally
I used to think that I didn’t like sports movies. I mean, they’re about sports, which are low on my list of preferred entertainment unless it’s an Olympic year. But the more I think about it, the more I realize that it’s not sports that I don’t like, it’s football. The same applies to football movies.

To me football is full of negative connotations, many of which are presented in the few football movies I’ve sat through. It’s brutal and dangerous. The players all too often act badly off the field. The NFL involves itself in charity fundraising that is ineffective and purely about increasing its own profits. I’m not saying other sports are squeaky clean and without controversy, but it seems like nine times out of ten when I hear about a sports controversy, it involves football.

It’s hard for me to every really like a football movie because of this. There is nothing glamorous about the sport, in my opinion. While Any Given Sunday does show some very unglamorous things– a guy losing an eyeball, a player suffering from one too many injuries, a bevy of penises in the locker room– in the end it still attempts to glorify the sport in a way I do not understand nor agree with. It also doesn’t help that this is an Oliver Stone film, of whom I’m also not a fan. Some of the cinematography choices were odd and often distracting; I often found myself thinking more about the filmmaking than the film itself.

The acting is good– I’ll give it that. The only weak link is Cameron Diaz. She’s not terrible, but it’s clear that she’s out of her depth acting against Al Pacino or even Jamie Foxx (who is also great, but you can tell he’s improved immensely since this movie came out). The supporting cast is also excellent, lead by the likes of Dennis Quaid, James Woods, and Ann-Margaret.