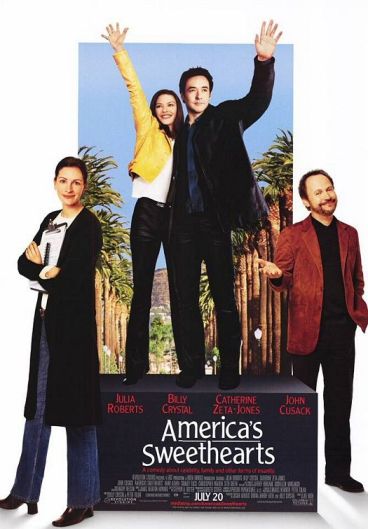 Ben
This was another example where I found myself wondering “why do I own this?” This is not a terrible movie, it’s just not particularly good either. Despite an all star cast, the film never hits the highs that could be expected from a film starring the likes of Billy Crystal and Julia Roberts.

Crystal stars as a publicist charged with setting up a press junket for a film that stars the hottest couple in Hollywood. The only problem is that the couple have recently split up and can’t be in the same room as each other. John Cusack and Catherine Zeta Jones star as the warring ex- lovers. They’re fine in this picture. Zeta Jones looks like she’s having fun playing a complete bitch who is far too pampered by the entourage of yes men that surround her. Julia Roberts is Zeta Jones’s mistreated sister. She is also her assistant and is forced to wait on Zeta Jones frequently.

Like I said, this movie is not very good. The biggest problem with it is that it’s not very funny. Cusack and Zeta Jones have their moments, as does Hank Azaria as her new Spanish lover. He steals every scene he’s in, but for a film starring someone like Billy Crystal, I expect a lot more.

Sally
I’ve never really understood Julia Roberts’ appeal. I’m sure she’s a lovely person, I just don’t care for her or most of her movies. I also don’t care for romantic comedies in general, with the exception of a choice few. You’ve probably guessed how I feel about this movie.

Actually, I remember the first time I watched America’s Sweethearts. It was during a group date in high school. My then boyfriend’s best friend’s girlfriend picked the movie. I agreed, because this is the sort of movie girlfriends make their boyfriends watch, right? I proceeded to sit in the theater, bored out of my mind, wishing I had stayed home and watched anything else. When it was over, the other girls agreed that it was really funny and cute. I went along with their assessment, desperate to fit in and prove my femininity.

God, I am so glad that I don’t care about that shit anymore. I proudly declare my love of Alien and Die Hard and Mel Brooks. I designed wedding save the dates based on the movie posters of Jaws and Star Wars. Yeah, I’ll sit through rom-coms; I just don’t feel the need to pretend I like them all.

To put it plainly, this movie is not very good. Sure, there are some good parts: Hank Azaria and Billy Crystal have some genuinely funny lines, and Catherine Zeta Jones excels as a bitchy, spoiled actress. But everything else is extremely bland. John Cusack is ok, basically playing the same charming good guy he always does. Julia Roberts also phones it in, playing the same nice-girl-who-gets-the-guy that she’s built her career on. The plot itself is simultaneously formulaic and overly complicated, with a strange movie-within-a-movie subplot and Roberts getting the guy in the end.

And to top it all off, we are treated to Roberts in a fat suit. Actually, “fat suit” doesn’t really describe it. It’s more of a “chubby suit,” because she doesn’t look fat at all in it. Yet the audience is meant to believe that this ugly duckling version of Roberts was a total fatty, and needed to shed 60 pounds before she could get the guy. Except that if she’s fat, then most of the people I know are morbidly obese. It’s sad and insulting at the same time, and I can’t believe Roberts went along with it.