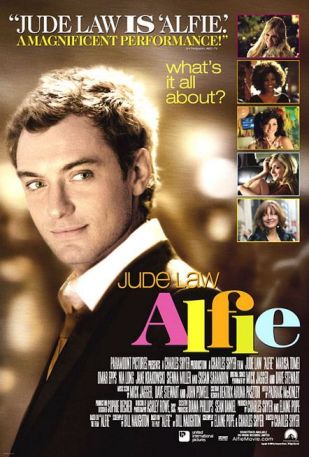 Ben
As I was watching this film, I found myself thinking ‘why the hell do I own this???’. I was really bored and I wasn’t the only one as I’m pretty sure Sally was asleep before the end. This is a remake of the 60s classic of the same name that starred Michael Caine. This updated version stars Jude Law as the title character, and to put it mildly, he ain’t Michael Caine. Alfie is a Jack the lad who sleeps with a lot of women and never wants to settle down. He lives his life without remorse until he’s rejected by one of his conquests, which lead to some awkward life decisions.

Law is not that bad, he tries hard and is charming. You believe he could legitimately sleep with all the girls he does throughout the film. It’s just that the character of Alfie doesn’t seem relevant in today’s society. In the swinging sixties, it was perfectly acceptable to have promiscuous sex with many anonymous partners and nobody would bat an eyelid (just ask Austin Powers). After the prevalence of aids and other STDs in the eighties, this type of person is not thought of as highly in today’s world. Due to this, Jude Law’s Alfie just comes across as a massive douche who is completely selfish. It’s not a character a normal person can relate to in today’s world, nor would I want to.

The other problem with this movie is it doesn’t really end. I felt like I was watching Fellowship of the Ring. Just when it seems Alfie is about to have an epiphany and change the way he lives his life, the credits start to roll. If I’m going to spend two hours of my life watching this garbage, I want it to have a resolution. This film doesn’t at all. It’s only redeeming feature is reminding everyone that Susan Sarandon is in her 60s and still smokin’ hot.

Sally
Switching from the Alien series to something like Alfie leads to some interesting comparisons. For example, who is the real monster: a creature that succumbs to its base instincts because it cannot control them, or a man who can think and act rationally but instead chooses to be a gigantic douche?

Anyway you slice it, the title character is a jerk. He acts carelessly in his personal life, regardless of the consequences, and all too often, the consequences do not affect him. Just when it looks like he might be learning a lesson, he doesn’t. Life goes on, and Alfie continues to sleep around, attempt to reinsert himself into women’s lives after they’ve left him, and expect perfection from his bedmates while falling incredibly short himself.

I don’t know if the Michael Caine original is better than the Jude Law version, but I’m in no hurry to find out. This movie was incredibly disappointing, no matter how attractive the cast or how slick the cinematography. The ending resolved nothing, and left me wondering “what is it all about?”

(Note: As Ben said, I did fall asleep during the last 10 minutes or so. I have watched this once before, but needed Ben to refresh me on the ending. His response: “He runs into Sienna Miller on a bridge. She tells him he’s a jerk, and then it ends.” Sounds about right, from what I remember.)