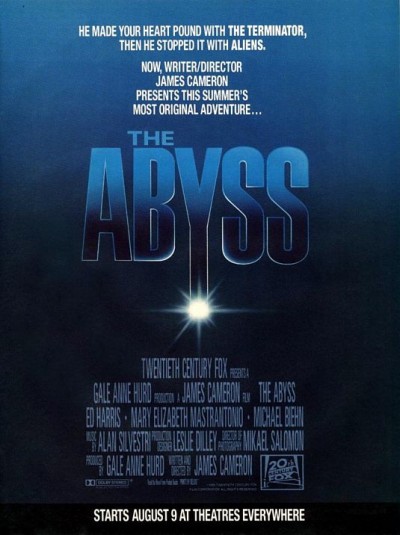 Ben
This was one of the few movies in the collection I hadn’t seen before. This was recommended to me by a friend in San Diego so I grabbed it off Amazon when it dropped below $10 (this will be a reoccurring theme throughout my collection), but didn’t get a chance to watch it until now.

Before watching, all I knew about this movie was that it convinced James Cameron that CGI technology was good enough for him to be able to make the liquid metal effects he needed for his Terminator sequel. That fact alone makes me happy this movie exists because T2 is one of my most favourite movies of all time. The fact that The Abyss also had a story and was entertaining were just bonuses.

The score by Alan Silvestri and the very enclosed setting of a underwater research station reminded me of a tamer version of Alien. Ed Harris and Mary Elizabeth Mastrontonio give believable performances as a divorced couple forced to work together after a submarine is attacked by an unknown source and they are sent down as part of a crew to find survivors. They end up finding underwater aliens.

My biggest problem with the movie was Michael Biehn (and his awesome moustache) as a navy seal sent down to help Ed Harris, who ends up turning on them after spending too much time in an enclosed submarine and going insane. I’d only ever seen him as Kyle Reese in Terminator or Hicks in Aliens, so it was difficult to believe him as an antagonist. Although, he was able to pull off a great villain later on in his career in the brilliant western Tombstone, but he’s struggling here.

The movie’s best achievement is in its special effects. In the late 80s, CGI technology was hardly ever used. This was the first movie I can remember where it was used and looked believable. It still holds up today despite being over 20 years old.

I enjoyed The Abyss a lot. It had a strong cast, a brilliant director and effects that still hold up today. It’s clearly not in the league of Aliens or Terminator, but being an average James Cameron movie is still pretty good.

Sally
I don’t think we’re off to a good start. Ben does not follow the “numbers before letters” rule of alphabetization. He prefers to spell out numbers, meaning 300 is placed under the letter T, 50 First Dates under F, etc. His system is madness. We are skipping at least a dozen movies by jumping right into letter A. Also, he’s just realized that The A-Team was incorrectly shelved after The Abyss.

But I digress… this is supposed to be about the movie.

This is my first viewing of The Abyss, though I have seen the clip of the water spout alien before. So obviously I was under the impression that this movie was all about aliens living in the darkest recesses of the ocean, attacking humans and whatnot. It’s not, and I was a tad disappointed.

In fact, I can’t quite figure this movie out. The science fiction element seems arbitrary at times; the Cold War plot line is a bit thin. The best parts are when you fear for the crew’s survival– from the elements, a possible alien threat, or each other– but even that is negated by a kind of saccharine ending. I guess I just like my aliens more aggressive, especially if James Cameron is involved.

I will say that most of the special effects have aged remarkably well, which is typically not the case for CGI. Still, the best “effects” are the real ones. Did you know there is such a thing as breathable liquid? I didn’t, but thanks to a white rat* and  this Gizmodo article I now feel a bit smarter. (Bonus: the article contains a pretty solid Arrested Development reference.)

* The rat was unharmed, but it’s still a difficult scene to watch.